Upper Gar Lake is connected to  Lake Minnewashta and East Lake Okoboji.  Known for its 5 mph speed zone, Upper Gar offers boaters a chance to slow down the pace, putz through and enjoy the scenery as much natural shoreline exists here.  The living on this lake consists mostly of condos and seasonal homes in areas such as Lakewood Park.  The great thing about upper gar is that it still provides you access to all of the other lakes, and you can walk just a few blocks to the Amusement Park and the Emporium.  Upper Gar offers the most affordable condo living as well.  Condos range from about $200000 to $325000.  Single family homes are not abundant and rarely come available.

The following is from the Iowa Great Lakes Water Safety Council:

Upper Gar Lake connects the south bay of East Okoboji Lake to Minnewashta Lake. At 37 acres, Upper Gar is the smallest of the Iowa Great Lakes chain. This lake is basically a shallow channel connecting two larger bodies of water. The average depth of Upper Gar is 3.5 feet, therefore warranting a maximum 5-mph speed limit on the lake. At its Northern end

Upper Gar Lake connects to East Lake Okoboji at the Hinshaw Bridge (near Trigg’s Resort) and at the Southern end it connects to Lake Minnewashta at the Sawmill Bridge. The Gar Lakes were named for their outlet known as Gar Outlet. This was because schools of Gars, a type of fish, were working their way upstream. Originally, there were three lakes known as the Gar lakes, forming a chain about two miles in length, and were called Upper, Middle, and Lower Gar Lakes. Around 1900, the name Middle Gar was changed to “Minnewashta,” which is Dakotah for good or nice. 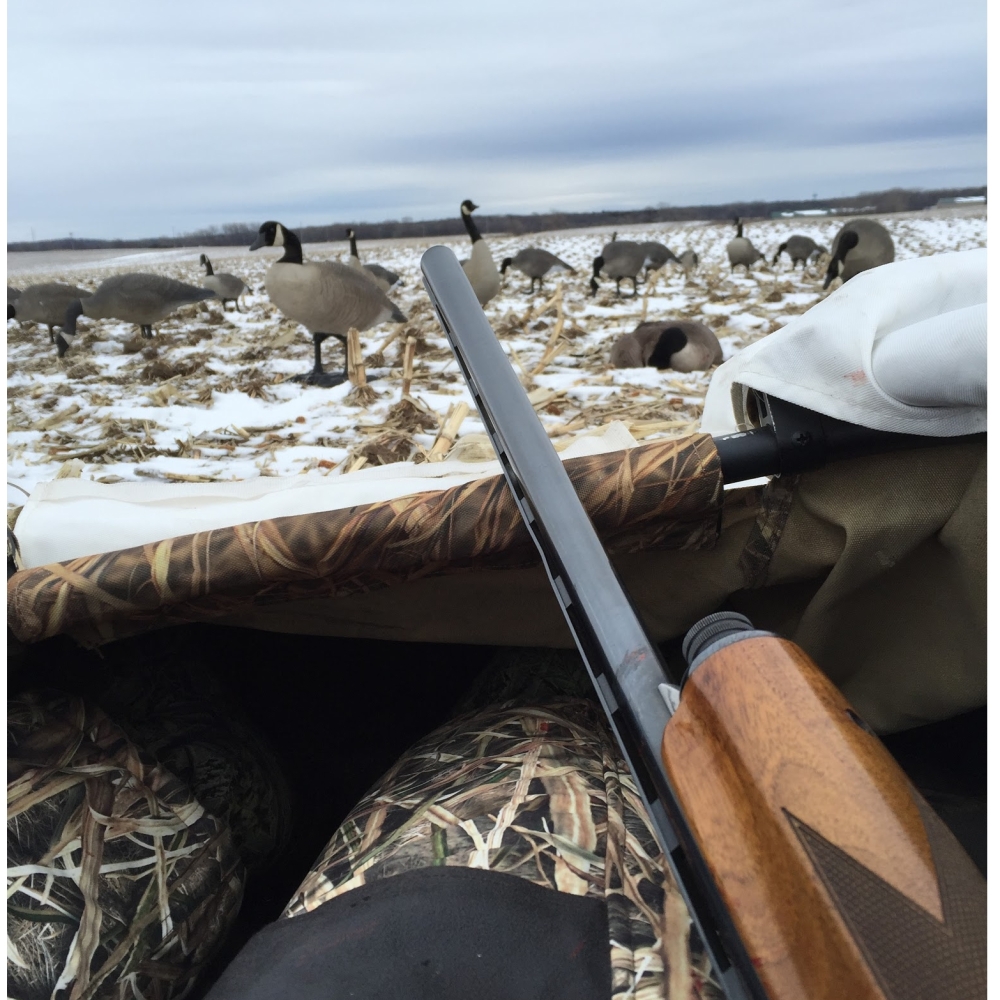 For the outdoorsmen who like to hunt ducks and geese, you have come to the right place. NW Iowa has a wide array of wetlands and great habitat and conditions to attract a large number of migratory birds. You can find a wide array of duck species in this area as well as a big population of Canadian geese. Duck hunting seasons start in September and ends in early December; Goose season starts in September and runs til the first week of January. See Iowa DNR for exact season dates and limits. 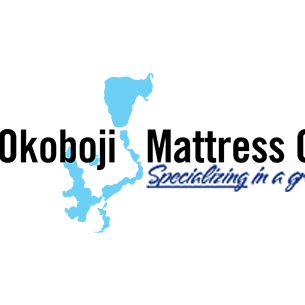 The Inn of Okoboji 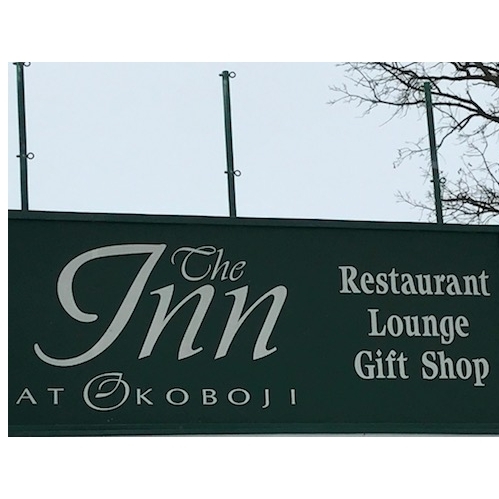 The Inn at Okoboji offers so much to do and so much history. Located on 500 feet of West Okoboji Lake lakeshore, the views are amazing. The Inn is a hotel/resort, with a dining and a full service facility designed for meetings, gatherings, events and weddings.

Also, The Inn has a 9 hole executive golf course and is partnered with other local golf courses in the Iowa Great Lakes Area. They also have in door and out door pools with a hot tub, docks, and an on-site boat lift

If you are looking for a family friendly place to watch the fireworks on the 4th of July while avoiding the congestion of the Amusement Park area, this is your spot. You don't have to be a guest of the hotel, but the 500 feet of lakeshore provide ample seating for hundreds of people to have a good time. They offer live music and offer hot dogs and hamburgers, so come enjoy the day and stay for the fireworks. 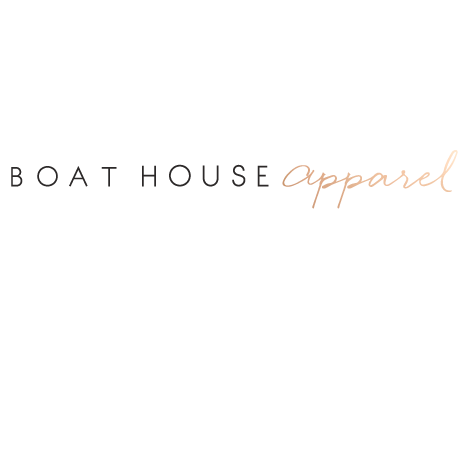 Boat House Apparel brings chic clothing to the Okoboji area, with her designs centered around life at the lake. The stylish tops, dresses, and more have witty sayings, anchors, and all things that remind us of the lake we all know and love. With a large online presence, Boat House is not only popular in Spirit Lake, but all over the country! Bringing comfort and chic to her amazing designs, the owner of Boat House, Laura, has sure made an amazing clothing line right here in the heart of Spirit Lake. 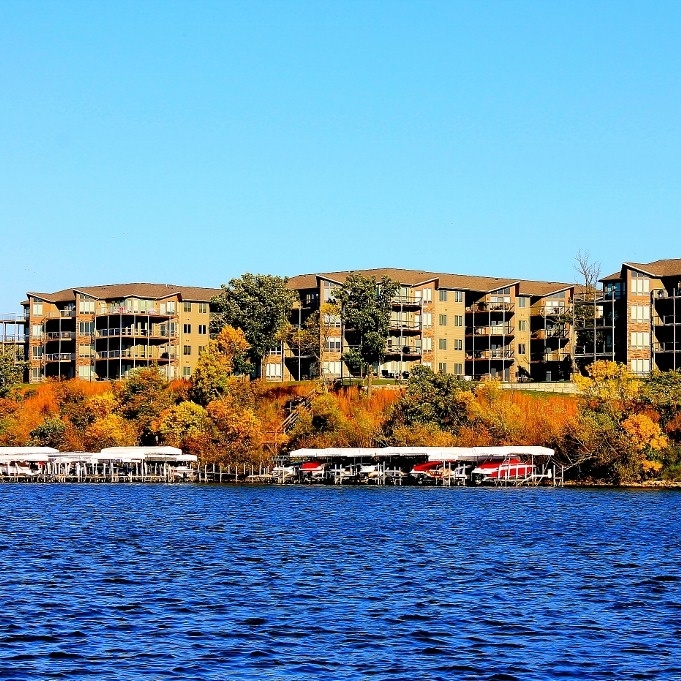 Bridges Bay Resort is built on the land purchased a few years prior which used to be owned by the Nielsen family of Arnolds Park. This huge complex consists of a hotel, 3 condo buildings (a 4th is under construction), and over 100 vacation cabins. A popular part of the resort is the indoor waterpark that cabin and condo owners have access to, but also, so does the public for a fee. Braccos is a fantastic summertime restaurant and bar which is frequented by boat, by car, and by foot, especially from the owners of the condos and cabins. All of the units at Bridges Bay have an opportunity for a boat hoist, and it is an extremely popular destination for out of towners looking for a vacation spot in Okoboji. Because Bridges Bay is not within the city limits, many owners utilize property management companies to help them rent their units by the day, week, and month. I've personally sold and shown many condo and cabin units and would be delighted to help.

Let the experts at Sanford Home Medical Equipment help you find the medical equipment you need. Their services focus on your safety and comfort. Sanford is here to help you find the products and services that are the perfect fit for your health needs, physical characteristics, environment and lifestyle. 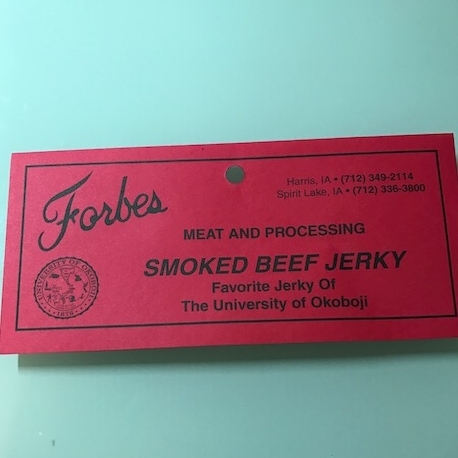 If you want to grill out tonight, this is the place. Forbes Meats offers amazing steak, pork chops, roasts and other cuts, as well as fresh and smoked sausage products.

Oh, and don’t forget to try the beef jerky, it is amazing.
Easy to find, next door to Renew and across the highway from Lakes Regional Hospital. 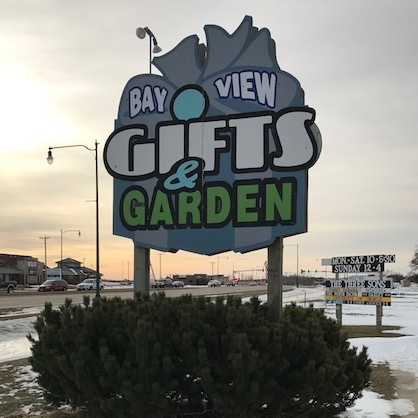 Bay View Gifts & Garden is another opportunity for those of you who are looking for antiques. One can find other Gifts, Outdoor Décor and Plants here as well. Take a look at the selection of Adirondack chairs as you drive by on Hwy 71. Located across the street from us at RE/MAX Lakes Realty 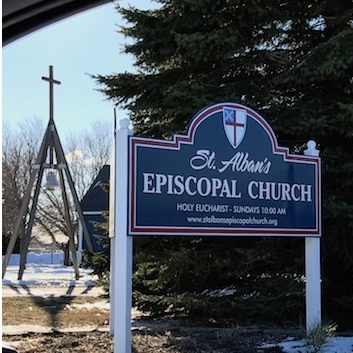 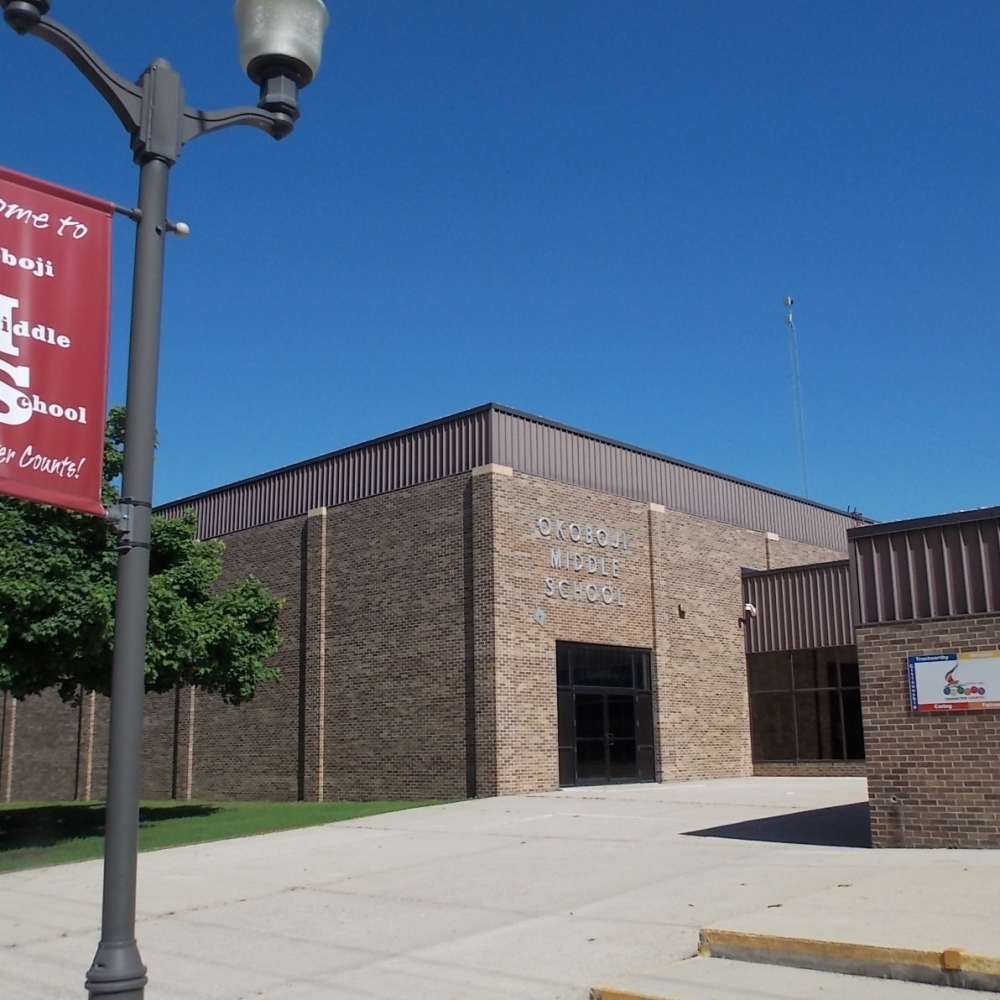 Okoboji Middle School is a place where we are Pioneering Pathways for Every Student. We focus on giving EVERY student access to a world-class education in small-town Iowa. We do this in three primary ways:

We employ staff who care deeply about the lives and learning of each student. From the classroom to the kitchen, we believe positive relationships between our staff and students form the foundation for all student learning.
We focus on preparing students with the competencies and skills needed to thrive in the world beyond our school. All teachers use a common language focused on developing the following five competencies in all our students:
Critical Thinking: The ability to incorporate key information to develop solutions to complex problems
Productivity & Accountability: Demonstrate initiative, self-direction, and personal responsibility to create quality results.
Complex Communication: Successful sharing of information with a clear message.
Collaboration: Respectfully working within a group to achieve a common goal.
Growth Mindset: The incorporation of creativity, unique thoughts, curiosity, and innovation in learning.
We focus on creating learning experiences to prepare our students to solve the problems of tomorrow. Nowhere is this more exemplified than in our Midmester Academy. Through our Midmester Academy, students spend over 120 days throughout their middle school career engaging in 24 real-world, interdisciplinary, problem-based courses. Their experiences culminate in an 8th Grade Capstone Project, where students showcase their middle school learning to a panel of peers, family, and faculty.

We hope you will take to time to peruse the Midmester Academy Handbook Course Booklet and navigate our website to learn more about our school. Most importantly, we want you to know that if you are considering Okoboji Schools for your family, we would welcome the opportunity to give you a guided tour of our facilities, which will include a detailed exploration into the programming we offer our students. Please contact any of our school offices to set up a tour. 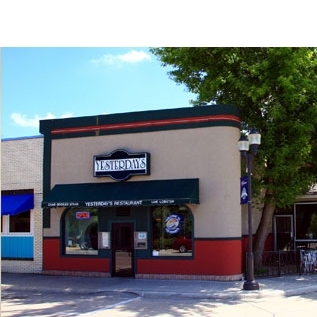 Yesterdays Restaurant has been an Okoboji favorite and is only opened seasonally. Yesterdays has a complete dinner menu that features nightly specials. They have a wonderful martini menu that will not disappoint. Make sure to also make reservations in the Japanese Teppanyaki Room. Watch as asian inspired meals are prepared and served by your personal chef. 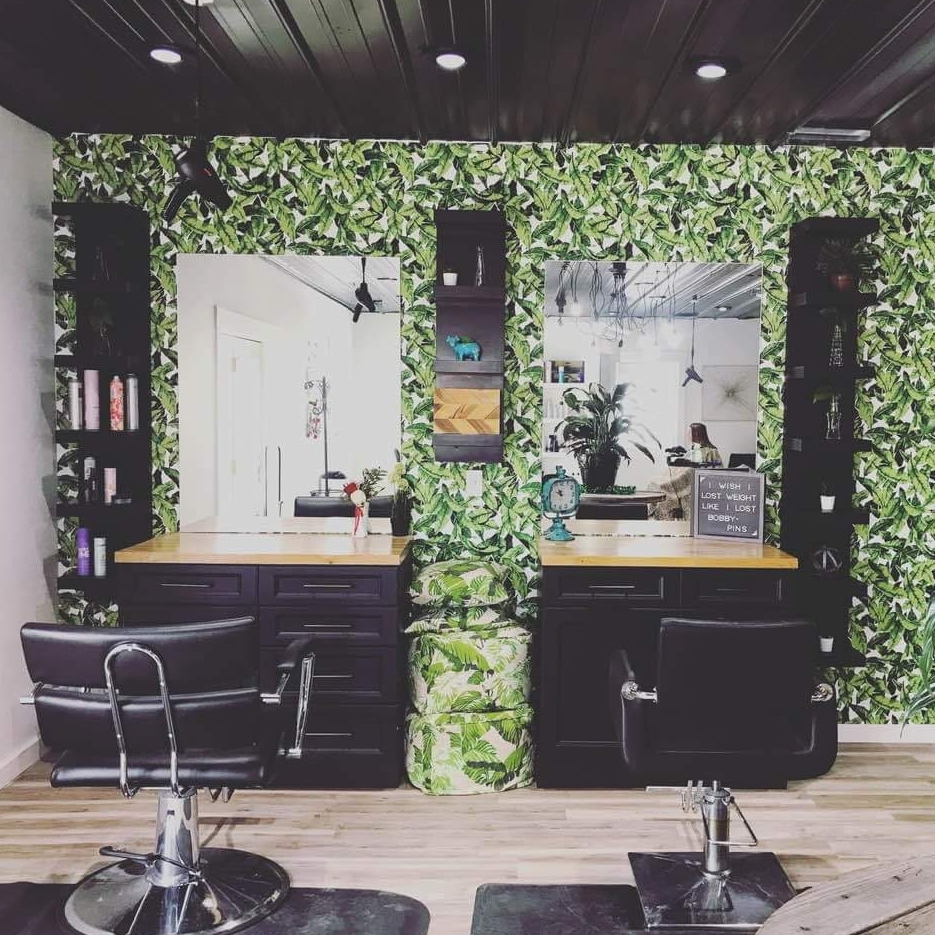 Go check out Boji Roots Salon in Milford! Sherri does an amazing job of doing exactly what you ask and is very good at giving you ideas on new trends. The salon it's self to so cute inside! She also offers a great supply of products for you to purchase so you can feel like your at the salon even at home. Sherri is very flexible and also fast! When you are very busy its great knowing you wont be sitting at the salon for hours!

The newsletter is sent periodically and will update you on the latest real estate news and offers.

SellBoji.com and RE/MAX Lakes Realty provides these covenants/bylaws/horizontal propoerty regime declarations as a convenience, and in no way guarantees the accuracy of these documents, and in no way represents that these documents are up to date and/or legally binding. It is the responsibility of any potential buyer, seller, investor, and/or real estate agent to contact any association contact and/or the Dickinson County recorder's office in order to satisfy themselves as to the very latest available documents.

These documents are the property of SellBoji.com and RE/MAX Lakes Realty. The downloading of these documents for use by any other Real Estate Agency is strictly prohibited.